Staffordshire is a dark horse. An unsung, unassuming county full of friendliness and rural charm, it has a proper ‘shire’ heart. And yet for some reason, it isn’t plagued by the crowds that flock to other beauty spots.

It’s our beloved home county, but it’s a fact that talk of Staffordshire rarely leaves, well, Staffordshire. Why is this?

A recent YouGov poll of the popularity of English counties told an interesting tale. Dorset, Devon and Cornwall made the podium, and of the top ten, only one of them wasn’t coastal. Every year, thousands of people bypass the county on their way to the distant edges of the U.K. What they can expect when they arrive is beautiful scenery, granted, but also everyone else who got the memo.

The M6 is an artery road in a real sense. It funnels the traffic through and out of our great county. Around it in either direction lie miles of stunning countryside, with grand castles, stately homes and gardens, medieval towns, ancient forest and swathes of moorland.

Nothing worth stopping for, then…

We’ve created the ultimate Reasons To Visit Staffordshire Guide, because it’s high time it had one.

Nestled between the hubs of Manchester and Birmingham, Staffordshire’s combination of grand peaks and gentle flood plains keep it pleasantly rural. This means we also have a precious commodity...space.

The outstanding Peak District National Park rises to the north, a rambling and wild landscape of tumbling hills, deep forested valleys and rocky outcrops that hold the sunset. 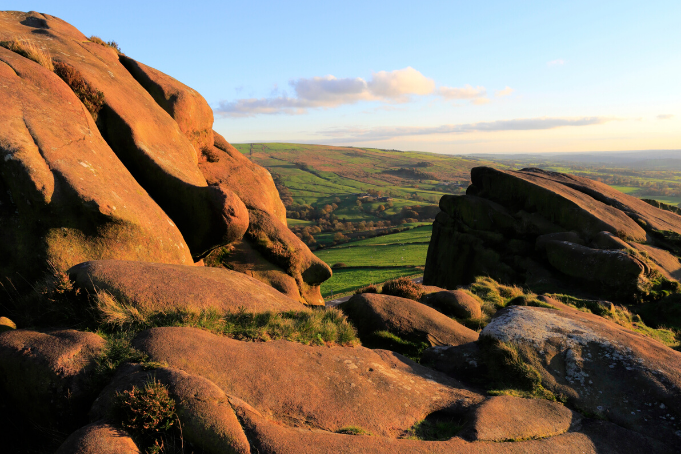 [Glimpse of countryside from Rocks in the Peak District]

The wilds of the Peak District give way to fields and the ancient oak forests of Cannock Chase. In the centre of Staffordshire, the green plains of the river Trent wind through gentle quintessentially English countryside. There are also miles of rolling hills, with farms tucked in their folds and sheep grazing their flanks. 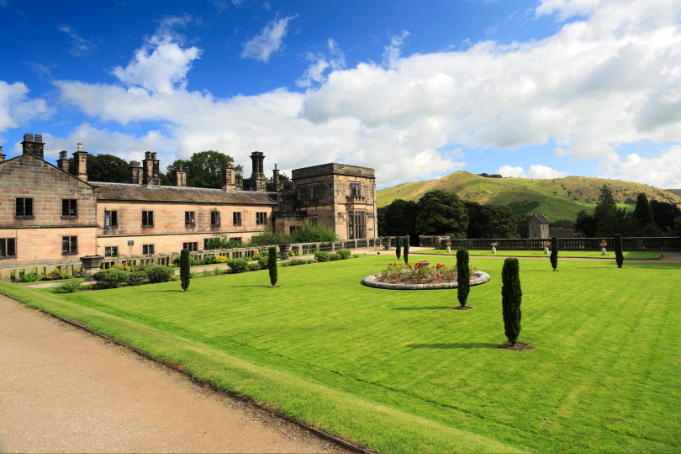 [Rolling hills behind the village of Ilam]

Near us in Acton Trussell, Cannock Chase AONB is a playground for outdoor lovers. The forest and moorland is a beautiful region to explore. There is also the National Forest and the Forest of Mercia, green lungs built to create wildlife strongholds in the centre of England. Forests play a vital role in regulating the climate but they are also important for our health, with studies even showing that trees release antimicrobial chemicals (called phytoncides) which enter our immune systems when we breathe them in and help us fight disease. 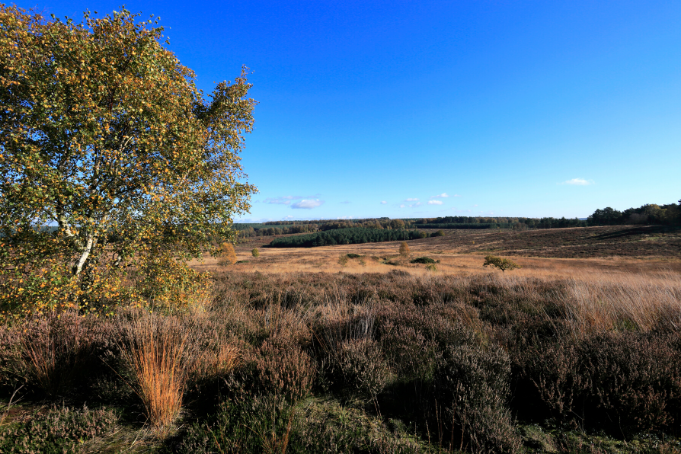 Part of the National Forest has a symbolic significance.The National Memorial Arboretum is the UK’s centre of remembrance. It sits in the heart of the National Forest’s maturing woodland, with over 330 thought provoking memorials. It is home to the Armed Forces Memorial which commemorates those who have been killed on duty or due to terrorism from the end of the Second World War to the present day. 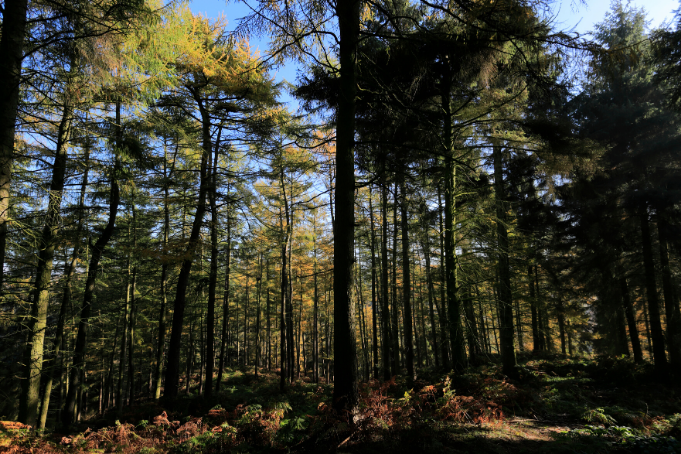 One of the most famous sights in Staffordshire is Lichfield Cathedral, which is widely regarded as one of the finest cathedrals in the country. 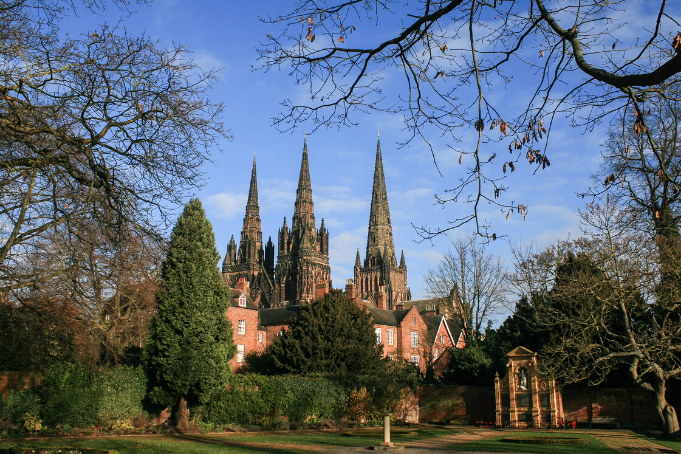 We would argue it is also one of the most accurately preserved cathedrals in the world. It completely dominates the city’s low-rise skyline, as it would have done when it was built in 1300.

It has to be seen in person to get the full effect. Stand before it today and experience it as worshippers in the middle ages would have: as a presence as imposing as their God. 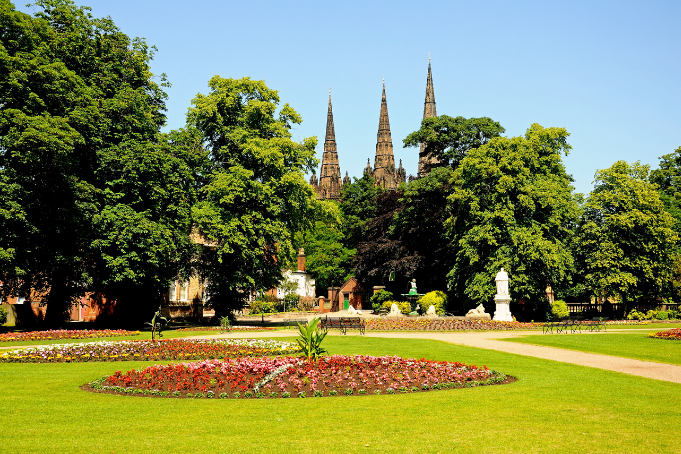 Lichfield itself is a charming city, a scroll of historic streets centred on the cathedral and its lush, almost tropical parkland. Perfectly walkable, with plenty of independent shops and cafés. 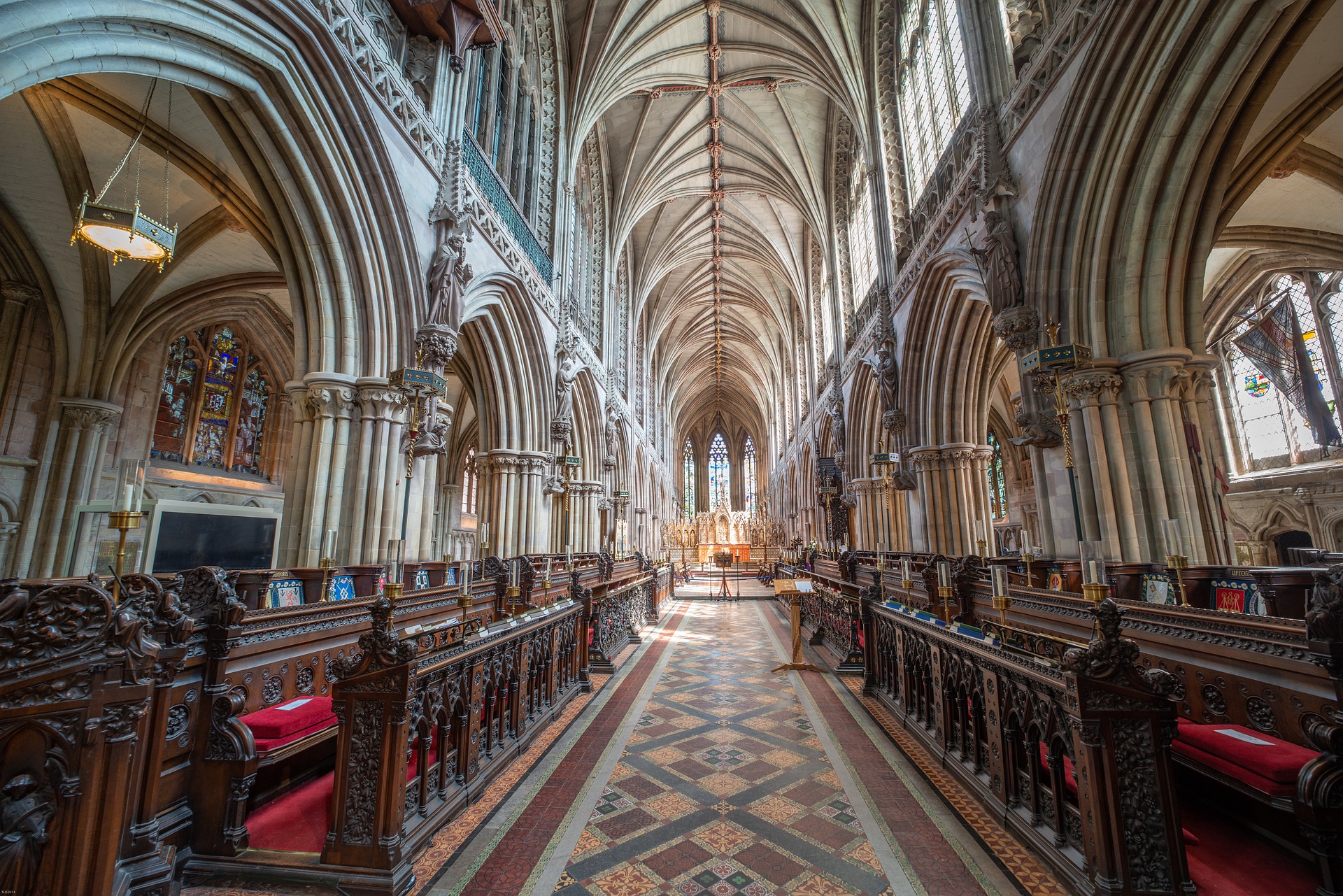 4. The Heart of England

You’d be forgiven for thinking Lichfield’s cathedral is one of the county’s oldest buildings. In fact, Staffordshire’s castles are older than England itself.

What is now our country was once divided into seven separate kingdoms. The largest, Mercia, was centred upon the river Trent in Staffordshire. Ring any bells? Fans of The Last Kingdom (currently streaming on Netflix) will be familiar with Mercia's integral role in this period of our history. 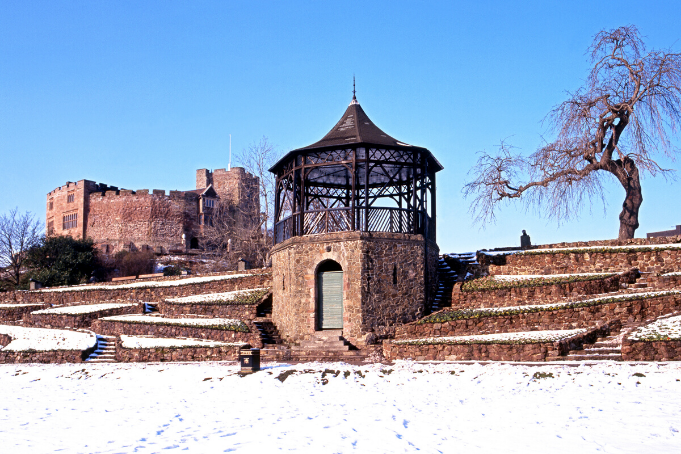 Today our castles bear silent witness to history of Mercia and England, from Mercia’s stronghold at Tamworth Castle, to Stafford Castle. A castle was reputedly built on the site in 913 by the warrior princess Æthelflæd, Lady of the Mercians. It was listed in the Domesday book of 1086 and has a complex history of conquest ever since, having been besieged and conquered through the centuries including in the Civil War. 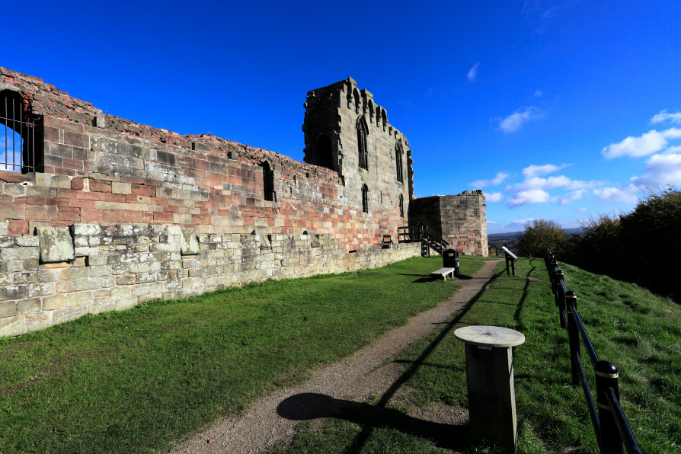 Explore Staffordshire’s 6000 acres of country parks, open spaces and greenways to your heart’s content. There is public right of way on 2500 miles of country trails and footpaths.

If Acton Trussell is your base, you don’t even need to think where to walk. We’ve teamed up with iFootpath, a walking app with two inspiring routes, one of which starts and finishes at The Moat House, taking in local landmarks and points of interest. Dig out your walking boots and work up an appetite for our award-winning cuisine. Download iFootpath App | Download Walk. 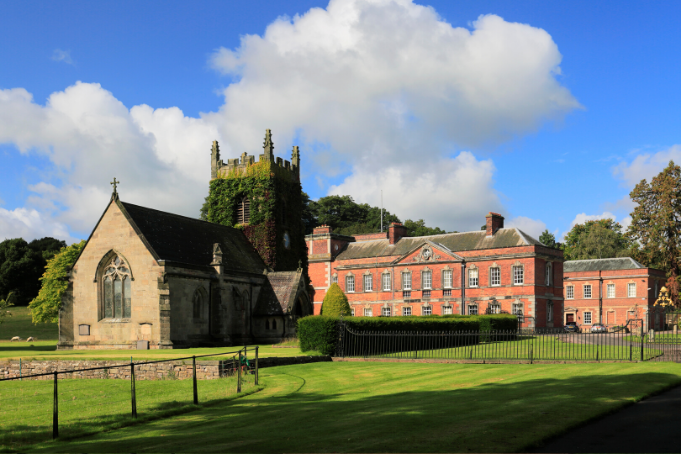 Anyone with a penchant for gorgeous gardens, honey-coloured stone palisades and period dramas will feel at home in Staffordshire. We have some of the grandest stately homes and gardens in England. 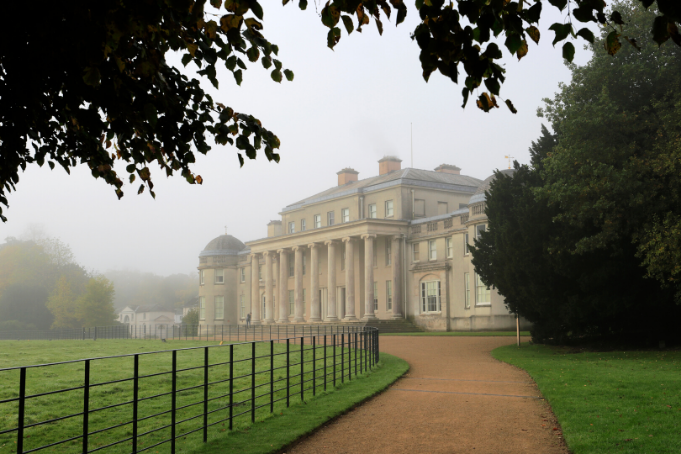 Shugborough Estate is a fine example. Its gardens were designed by the great Lancelot 'Capability' Brown, with elements that draw on the exotic travels its owners made in India and Japan.

It’s also much more than that, the National Trust have opened ‘The Complete Working Historic Estate’, which includes a working model farm museum dating from 1805 complete with a working watermill, kitchens, a dairy, a tea room, and rare breeds of farm animals.

Staffordshire’s food is a celebration of its bountiful fields, proud history and culinary innovation.

Here are a few of our top foodie suggestions:

• Eat fine food at The Red Lion in Bradley and the Dog and Doublet in Sandon.

• Lunch like a local in Lichfield’s aptly named Damn Fine Café. Try their toad in the hole- a cooked breakfast (veggie or otherwise) piled into a big Yorkshire pud. It’s as good as it sounds.

• Stop off at as many rural farm shops and cafes as you can, including Denstone Hall Farm, winner of the best large farm shop in the UK! They’re all unique and those fresh stuffed oatcakes won’t eat themselves.

• Head to our two AA-rosette restaurant for modern British food at its best.

• Check out the award-winning Seed Chocolate in Stoke-on-Trent, a micro-batch bean to bar chocolate maker. 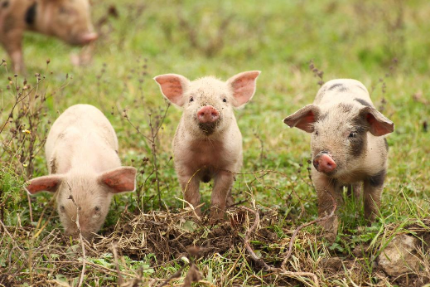 Staffordshire's latest visitor attraction, come and see framer Ray's dream: the newest farm park in the UK. Situated less than 5 minutes from the Moat House, Lower Drayton Farm Park is all about rural life. Say hello to the cows, sheep, goats and 'four little pigs', then offload the little ones in the indoor soft play area to let off some steam.

While all of the above appeal to most kids we know (giant Yorkshire puds, chocolate makers and piglet petting...need we say more) sometimes you want a one-stop-shop for all age groups and weathers.

Alton Towers Theme Park
If you’re looking for pulsating rollercoasters, there are none better than the Alton Towers rides! Enjoy the thrilling Wicker Man, a unique, immersive rollercoaster experience – the first in the world to combine wood and fire!

Tackle the exhilarating Big Six, from Oblivion, with its exhilarating vertical drop, to the legendary Nemesis, Europe’s original inverted thrill ride, and The Smiler, the world’s first rollercoaster with 14 loops. Escape from the mayhem in the historic castle and beautiful gardens, discover the weird and wonderful creatures in Sharkbait Reef by SEALIFE, cool off in the Alton Towers Waterpark and tuck in to an exciting meal at the world’s first Rollercoaster Restaurant.

Drayton Manor Theme Park
At Drayton Manor Park, you can get to know some well-loved children’s TV characters at Drayton Manor Thomas Land, the only official Thomas & Friends themed attraction in Europe.Take a tour of Thomas Land with Thomas, Rosie or Percy, put out the flames on Flynn’s Fire Rescue, and soar into the air with James and the Red Balloon.

Test your nerve on a whole host of Drayton Manor rides, with plenty for thrill-seekers to enjoy. Brave the world’s first stand-up rollercoaster, Shockwave, as it powers through twists, loops and bends, or experience the pulsating 54m drop, followed by a four second freefall, on Apocalypse.

And what about Maelstrom? A firm favourite with Drayton Manor visitors, this is a white-knuckle swing which takes you to great heights before plunging back to Earth – but not before the 360 degree turn!

Away from the mayhem, there are more than 80 different species, including tigers, meerkats and lemurs, waiting for you at the fascinating Drayton Manor Zoo.

Snowdome Tamworth
The original UK indoor ski slope, Snowdome Tamworth is a great family day out, packed with soft landings on real snow all-year round! Snowdome activities include ski and snowboard sessions on the 170m main slope, with lessons for all abilities on the two training slopes to get you ready for your winter break, plus great snow fun like tubing, sledging and huge games of snowballs.

Why not take your pick from the list above while staying with us? Our grade II listed manor house hotel is the perfect base whether you plan to relax or explore.

We are nestled in rolling countryside in the village of Acton Trussell, a short drive from the M6.

It's a world away from the bustle. We are surrounded by our gardens and the peaceful waters of our lake.